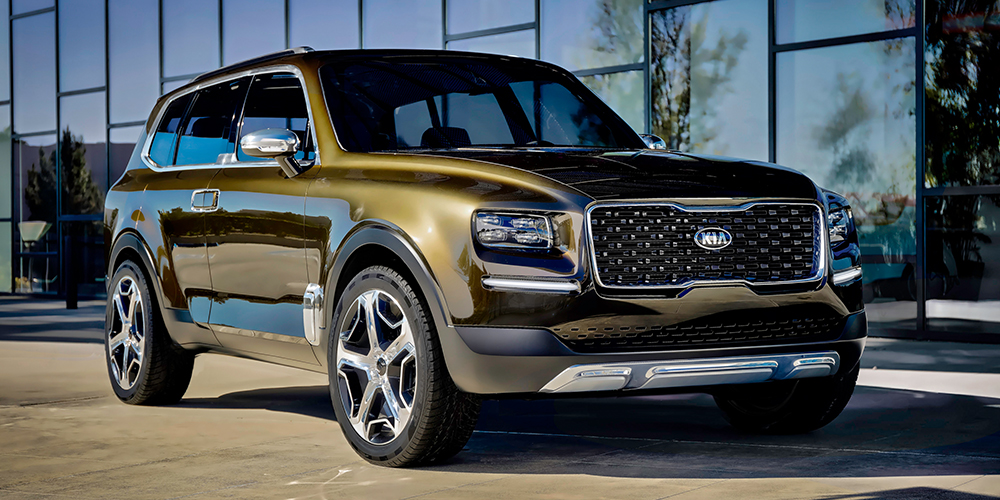 The concept of a large SUV packed with a suite of new technologies and design ideas has been unveiled by Kia Motors at the 2016 Detroit Motor Show.

Built on a stretched Kia Sorento platform, the Telluride concept is a glimpse of a possible future full-size seven passenger model that may go into production.

It impressed many in Detroit, in particular the US magazine Consumer Reports, which placed the Telluride among its Top Nine Best Cars at the show, declaring the "three row SUV looks like it’s ready to go on sale tomorrow with just a few tweaks".

The Telluride is some 241mm longer than the Sorento, 119mm wider and 112mm higher, giving it a sizeable on road presence. The wheelbase has also been stretched by 302mm to deliver a roomy interior.

It features rear-hinged back doors to create an expansive and panoramic interior space, minus the usual B-pillars on conventional cars. The seats themselves appear to ‘float’ within the cabin space, while the second row seats recline nearly flat and include large fold-away footrests for superior comfort. All four seats include a series of precision diamond-cut openings in the seatback, each embedded with Smart Sensors to capture the occupant’s vital health information.

That information is displayed on the interior door panel screens and systematically synchronise with a Light Emitted Rejuvenation (LER) system embedded into a wing-shaped LED panel mounted beneath the oversized sunroof, which displays a pattern of therapeutic light to “treat desynchronosis (jetlag) and improve the passengers’ energy levels”.

Another unique technology is Swipe Command – a thin, touch-sensitive, interactive band mounted to the centre console between the second row seats – allowing passengers to quickly scroll and select desired media by simply swiping their hand. The selected media is then played either through the premium seven-speaker Harman Kardon® audio system, or via a set of portable Harman Kardon® headphones that wirelessly charge when stowed in the console.

In the front centre console is a facility for wireless smartphone charging, a feature that has recently been introduced to vehicles here in New Zealand.

Kia’s first use of 3D-printed components can also be seen in the distinct, modern design elements used in the dashboard, door panels and steering wheel.

The advanced technologies seen inside the Telluride are complemented by a powerful, yet highly efficient PHEV powertrain that utilises a 3.5-litre gasoline direct injected (GDI) V6 engine combined with a powerful electric motor, which together deliver an impressive 298kW (400hp) of peak power to the smart AWD system. There’s even a high-tech method of starting the vehicle through a fingerprint activated push button start.

Will the Kia Telluride ever go into production? Kia isn’t saying, but the company does have a history of delivering production vehicles that bear strong resemblance to preceding concepts.

“It’s an interesting concept,” comments Todd McDonald, General Manager of Kia Motors New Zealand. “The designers have obviously had a lot of fun with the styling – both inside and out – and it will be interesting to see which of these elements make it into future production vehicles. We already know that we will see some of the technologies shown on the Telluride, such as the wireless smartphone charging. It’s a glimpse into the future.”