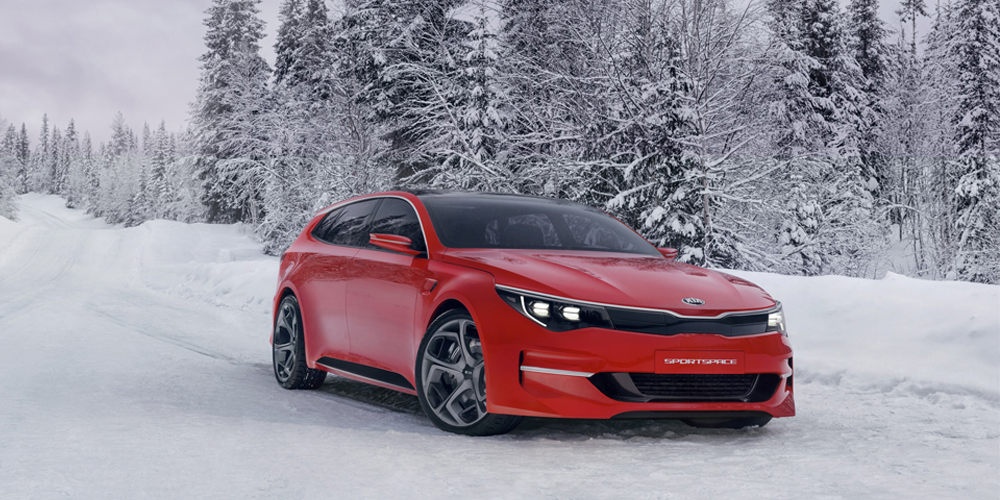 A new station wagon concept that combines attitude, space and gorgeous styling has been unveiled by Kia Motors at the Geneva Auto Salon.

The SportSpace wagon is yet another demonstration of the significant design talent propelling Kia Motors into automotive style leadership over recent years.

Built for long distance driving, Kia says the SportSpace is designed for fast and efficient travel with maximum comfort and minimal stress, in the best grand touring tradition of the weekend getaway. It’s also the marque’s first attempt to design a wagon for the mid-size market.

It embodies confident, powerful lines, which sweep elegantly from Kia’s hallmark ‘tiger-nose’ grille towards the rear of the vehicle with modern design and refined, understated energy.

Gregory Guillaume, who is Kia Motors’ Head of Design in Europe, says “We set out to design a car that is a totally new breed of grand tourer – one for active people who need reasonable cargo space on the weekend, but don’t want to compromise moving around in style, comfort and with an element of sportiness.”

He’s open about its origins, adding “Kia does not have a wagon in this important segment of the European market, but I was determined that we would not simply create something that conformed to tradition. 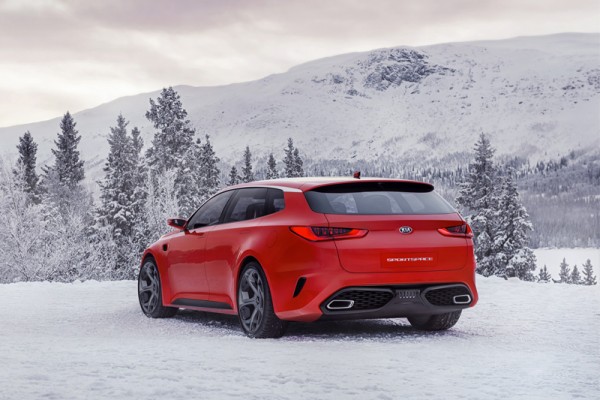 “Geneva is a special show for me – it comes as winter starts to release its grip. It has a special atmosphere and a particular appeal. The ideal concept vehicle had to reflect this – and I believe the SportSpace does just that.”

Its long and lean profile with unbroken surfaces and purposeful lines is emphasised by a very forward-positioned D-pillar and almost hatchback-like rear door arrangement.

Guillaume explains “Normal wagon treatment would include a long third window to suggest and show the luggage carrying capacity. But by applying a strong D-pillar treatment and a much more swept back rear hatch, we have given the back of the car a strong character – muscular and athletic.

“The visual weight of the rear is reduced with careful shaping of screen, door and rear bumper. The edges cut into the mass to make its raked appearance believable and less wagon-like.”

At the front, SportSpace wears an evolution of Kia’s signature ‘tiger-nose’ grille, but the solid Plexiglas insert isn’t as solid as it appears. It is actually louvred and rotates to allow greater air intake when required.

A strong character line runs along the body, visually connecting the front and rear. The car’s high beltline, the simple yet gracefully shaped flanks and the low-down inset carbon fibre kick-plate add to the sense of athletic muscularity.

Further dynamism is added to the car’s ‘Ignition Red’ bodywork by another satin accent strip, a spear of aluminium that arcs from front to rear, accentuating the car’s long and narrow glasshouse. A horizontal turn signal is inset in each of the side mirrors and mimics the front spoiler indicators. 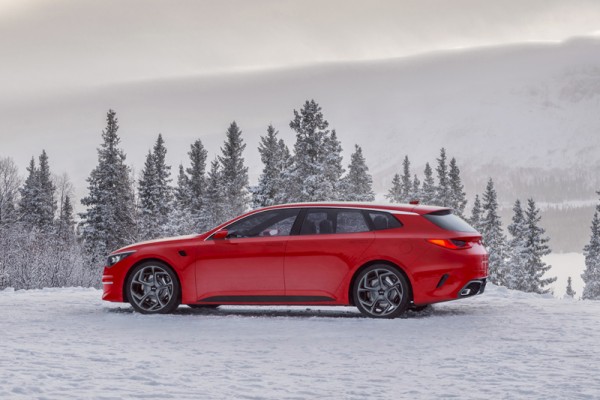 For all its exterior beauty, the interior is equally elegant and classical. As well as being spacious and inviting, it features a balance of luxurious leather with contemporary technical materials, including carbon fibre and milled, anodised aluminium.

The configurable digital instrument cluster is paired with a fully operational infotainment system, with a large screen that can be operated in single or split-screen modes. Where the rear view mirror would usually be located, a slim screen replaces it, fed by images from the rear view camera. Other driver information is also fed into this screen.

A prerequisite for an exciting grand tourer like the Kia SportSpace is the capacity to accommodate skis, which are stored between the rear seats, with a padded leather armrest doubling up as a ski rest. Slide it back and two recesses are revealed, which accommodate two tablets, one for each passenger. Rear seat occupants also have the option to utilise a unique tablet clamping system located on the back of the front seats, allowing them to view video and other multimedia content.

The rear of the central tunnel seamlessly connects to the boot space, where an innovative loading system, comprising 28 rolling balls, is set within the matt leather luggage floor. In combination with the low tailgate, these allow the easy loading of heavy suitcases and sport equipment. When the SportSpace’s ignition is switched on, each of the stainless steel balls lowers into its recess by 3mm, ensuring cargo doesn’t slide on the journey.

Such a special vehicle deserves a special power plant, which, in this case is the latest evolution of Kia’s diesel-electric T-Hybrid system, previously seen on the Optima T-Hybrid concept at the 2014 Paris Motor Show.

The compact and lightweight 1.7-litre diesel engine is now twin charged, the conventional variable turbo charger supported by an electric booster. This 48V booster enhances engine torque at very low engine speeds, as well as under acceleration for more effortless overtaking. Through its fully independent activation, it reacts faster than a traditional exhaust gas-driven turbocharger. At the same time the 48V technology is simpler and lighter than conventional hybridisation. This state-of-the-art innovation is further enhanced with an active multi-link rear axle to enable temporary AWD capability.

The SportSpace is the 11th concept car created by Kia’s European design studio in Germany, where Peter Schreyer and Gregory Guillaume are based. The striking designs created for the company in recent years have helped establish Kia as an automotive style leader, boosting sales around the world, including markets like New Zealand.

“The lines are simple, yet classical and elegant. It has to be one of the most charismatic looking wagons you’re likely to see.”